Amazon.com.au went live on Dec. 4, 2017, boasting more than 2,000 third-party sellers within 24 hours, according to business intelligence firm Marketplace Pulse. A month later, Amazon Australia had grown to over 5,000, with an average of 55 new sellers joining every day.

But as the marketplace approaches the one year mark, its trajectory has slowed considerably, with just 2,112 new sellers setting up shop in May.

Amazon Australia by the numbers 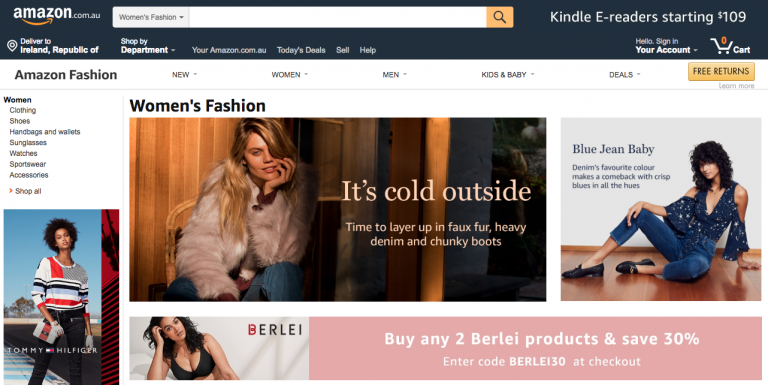 Today, nearly 14,000 sellers have products listed for sale, but it seems that Australian consumers are losing interest in the online store.

While the site attracted 14.3 million visitors in December 2017, based on SimilarWeb data, monthly traffic dropped to 10 million in April 2018. By comparison, eBay Australia, the market leader down under, had 75.7 million visitors that month.

In addition, despite the average seller having eight products listed for sale, only 4,359 of them have received at least one feedback review since the site’s launch, with only 2,497 receiving one in a month, which gives a rough indication of the number of active sellers.

In a bid to attract more merchants and buyers alike, the marketplace introduced Fulfillment by Amazon (FBA) in late February.

The service offers traders the opportunity to ship their products to the company’s fulfillment center in Melbourne and pay Amazon to store, pick, pack and deliver customers’ orders directly as well as handle returns. Meanwhile, buyers can avail of fast, free delivery on Amazon-fulfilled orders over AUD$49.

As of May 29, 19 percent of Amazon Australia’s top sellers were using FBA, with an average of five products listed.

Prime is on the way—but eBay got there first

When Amazon announced plans to rollout FBA in Australia, it also revealed that its Prime subscription service would launch in mid-2018—likely in time for the e-tailer’s annual Prime Day extravaganza, which takes place in early July every year.

Amazon has more than 100 million Prime members globally and the service includes exclusive discounts and free expedited shipping on millions of items, as well as unlimited music and video streaming.

That said, eBay has beaten Amazon to the punch, announcing on May 29 that eBay Plus would launch in Australia in mid-June. The program, only available in Germany right now, will offer Australian shoppers free delivery and returns on millions of items for AUD$49 a year. 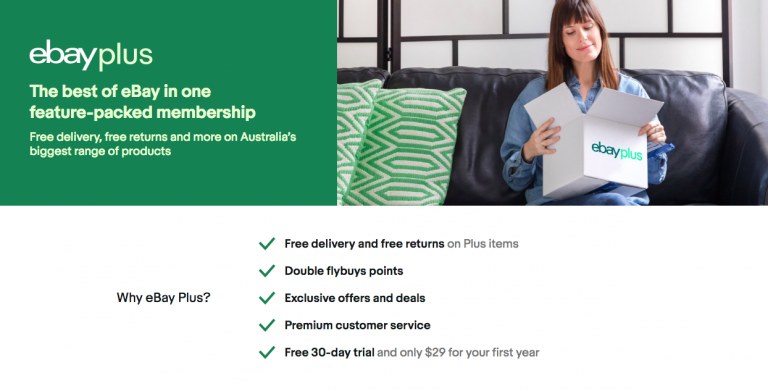 While it doesn’t specify exactly how fast shipping will be and won’t include any sort of streaming services, it’s still a significantly cheaper option than Prime. There’s been no word yet as to how much the latter will cost Australian consumers, although annual subscriptions are £79 in the UK and USD$119 in the U.S.

EBay Plus members will also get access to special deals and discounts as well as double Flybuy points (Australia’s largest loyalty program) on all eBay Plus purchases.

EBay is loathe to give up its market dominance down under. Not long after Amazon Australia launched FBA, eBay quietly banned its Australian sellers from using the service to fulfill orders. 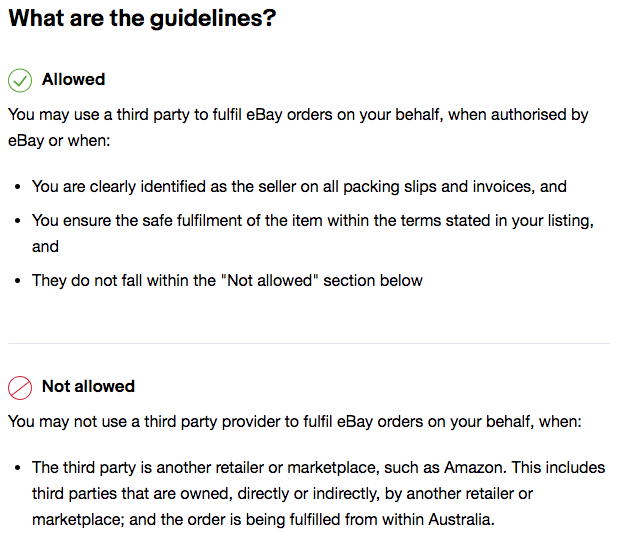 It’s worth noting that similar restrictions do not exist on eBay’s U.S. or UK sites.

Despite the slow start, Amazon Australia has nearly tripled in size over the past six months and Marketplace Pulse predicts it will have over 50,000 sellers on board by the end of 2018.

Not to mention, it’s Amazon’s fastest growing marketplace relative to its size, having added more new sellers than Japan, Mexico, Brazil and China so far this year.

And eBay certainly isn’t allowing Amazon’s lackluster debut to lure it into a false sense of security, which indicates that it’s merely a matter of when, not if, the eCommerce giant will crack the country.

At the end of the day, Australia’s eCommerce market is expected to reach nearly USD$12 billion in sales this year and will continue to grow to cross USD$16 billion by 2022. So smart sellers would be wise to enter the market now.

Selling on Amazon Australia will enable you to get a jump-start on building your reputation and ranking with exceptional customer service and an intelligent feedback strategy before the marketplace inevitably gets more crowded.

Repricer.com is the ultimate Amazon repricing software available, enabling you to react instantly to changes in the marketplace and stay ahead of your competitors. Start a free trial today and win the Buy Box.

The ultimate guide to winning the Buy Box 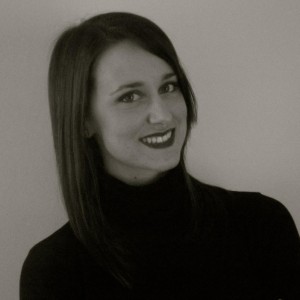 How to Create an Amazon Store in 2022

How to Easily List Products on Google Shopping With Repricer.com

Pros and Cons of Using an Automated Pricing Tool

Fulfillment by Amazon (FBA): Pros and Cons for Sellers in 2022 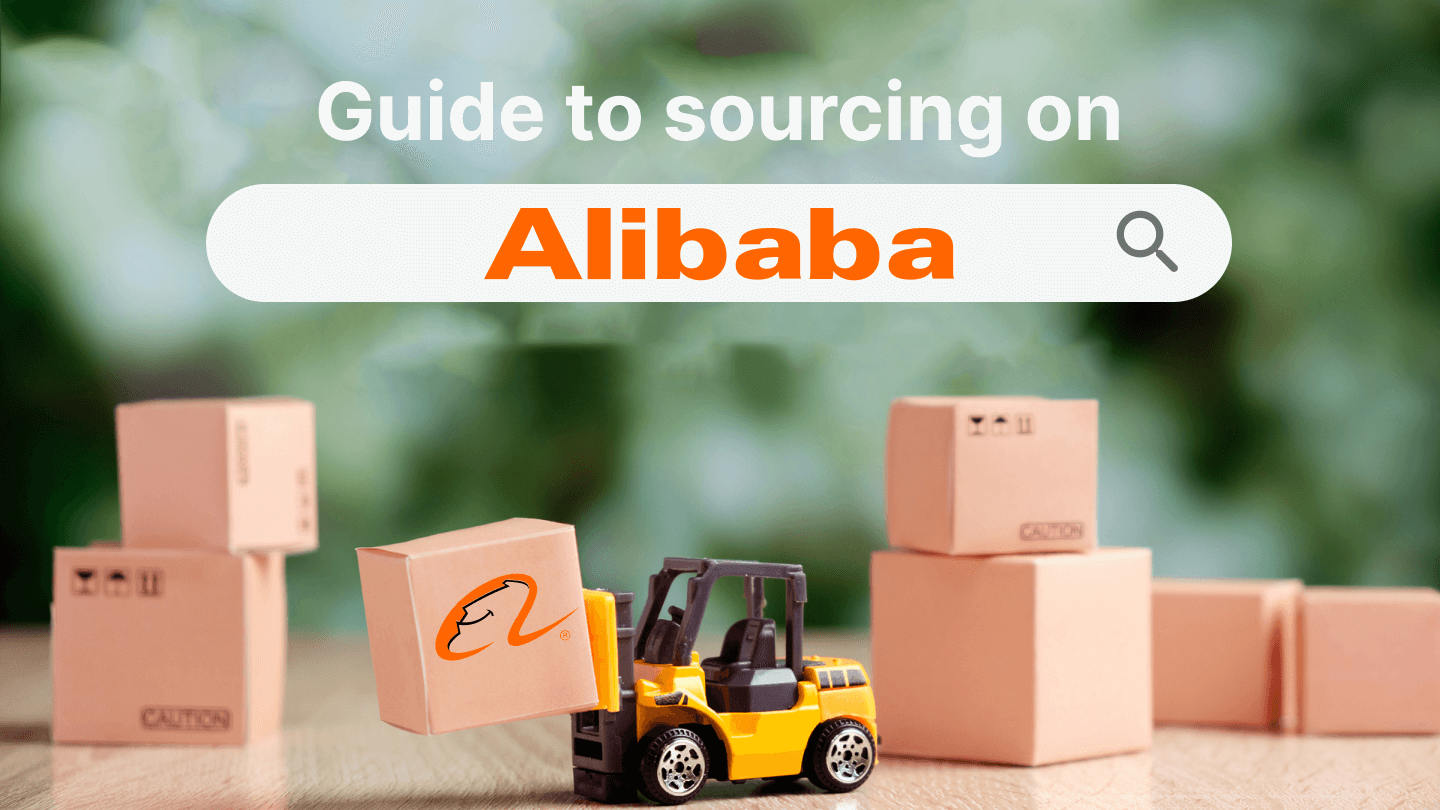 Sourcing & Negotiating on Alibaba: The Complete Guide for 2022

If there’s a product you’re in need of, chances are you can find it on Alibaba. Chinese-owned Alibaba is the biggest ecommerce website in the 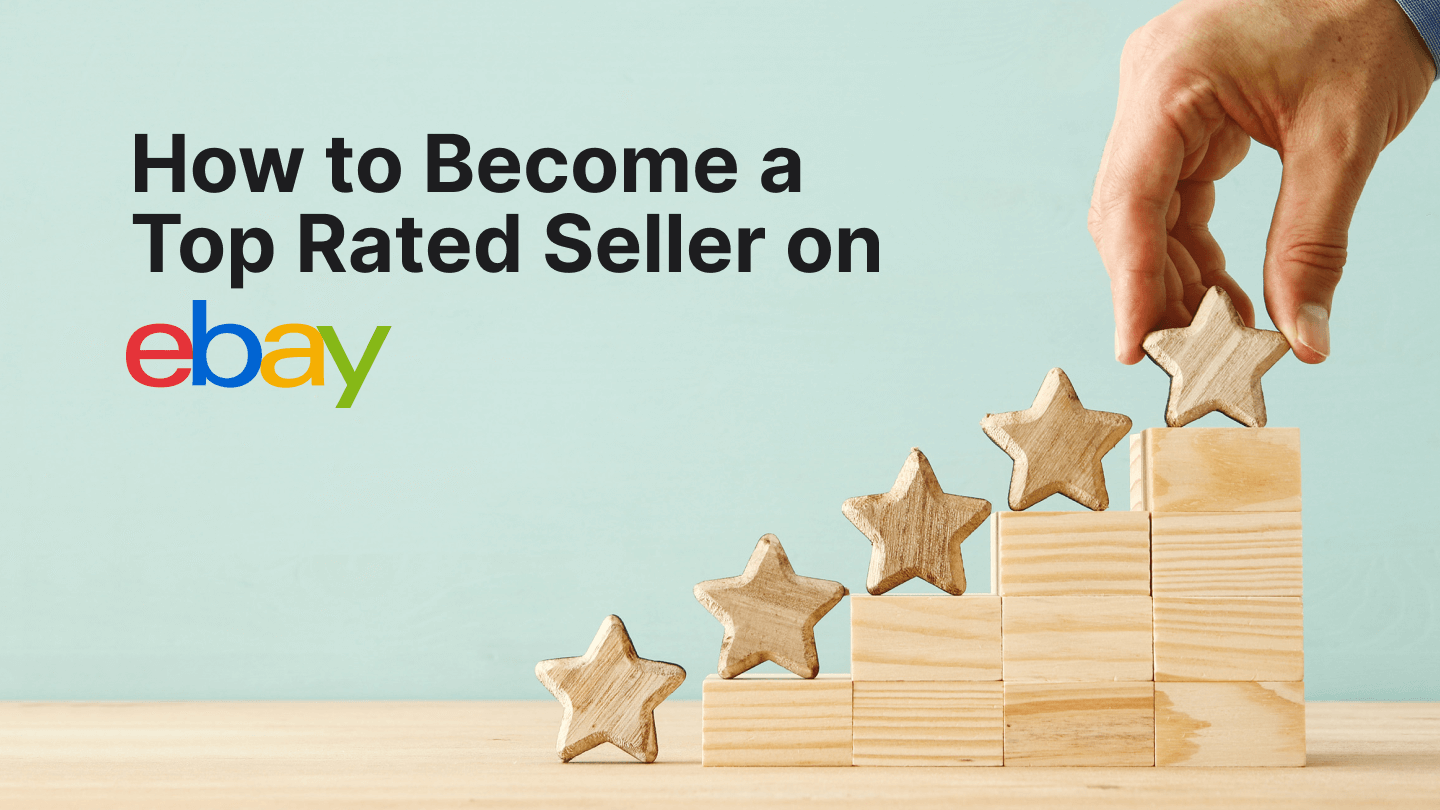 How to Become a Top Rated Seller on eBay 2022

Selling on eBay can be a highly profitable and lucrative business. Ever wonder how some of eBay’s top sellers earned their places at the top? How to Leverage TikTok for Amazon FBA 2022

TikTok has become one of the most influential social media platforms in recent years, particularly with younger demographics such as Millennials and Gen Z. A 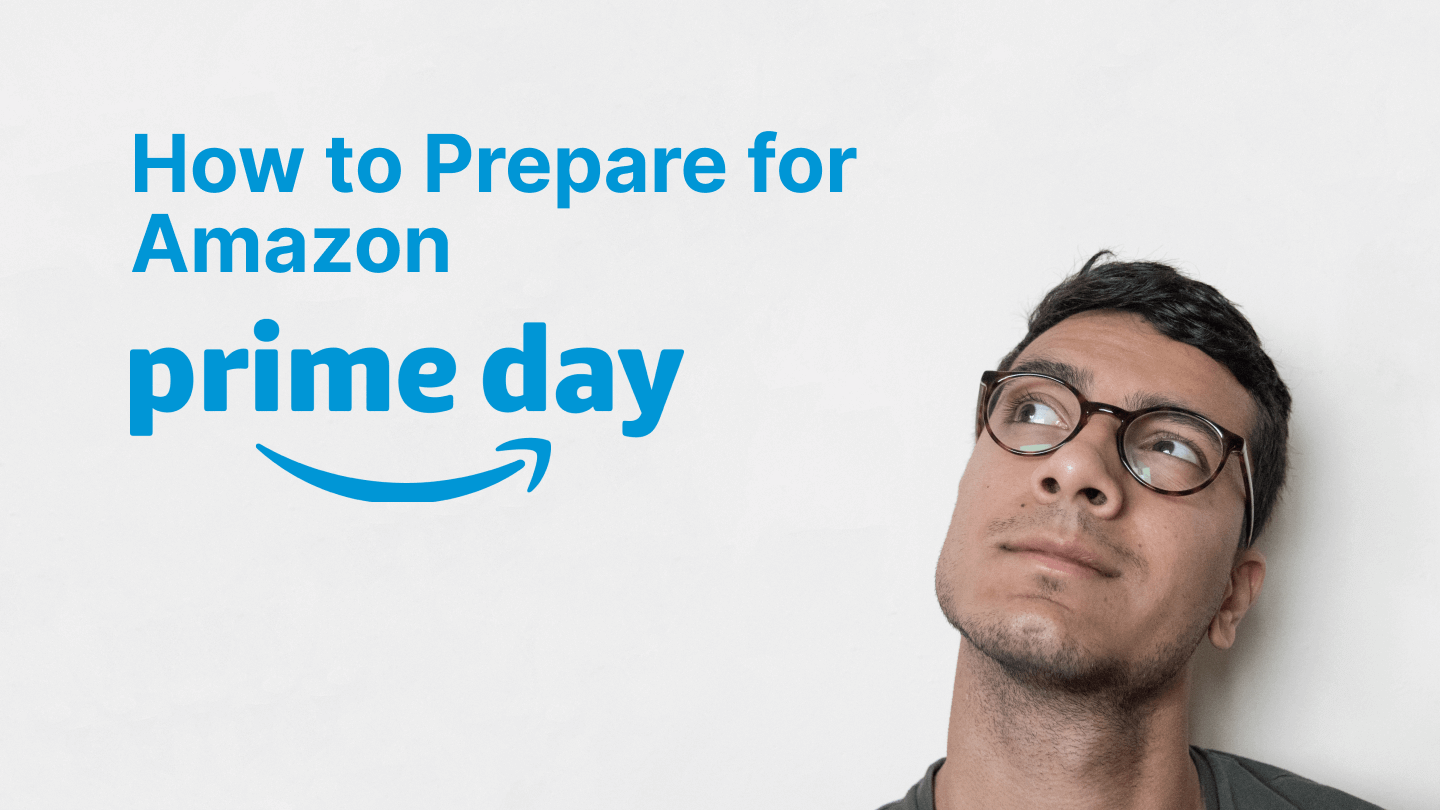 How to Prepare for Amazon Prime Day 2022

Prime Day is coming. Is your business ready?  By now, nearly everyone is familiar with (or has at least heard of) Prime Day, Amazon’s two-day

This website uses cookies to improve your experience while you navigate through the website. Out of these, the cookies that are categorized as necessary are stored on your browser as they are essential for the working of basic functionalities of the website. We also use third-party cookies that help us analyze and understand how you use this website. These cookies will be stored in your browser only with your consent. You also have the option to opt-out of these cookies. But opting out of some of these cookies may affect your browsing experience.
Necessary Always Enabled
Necessary cookies are absolutely essential for the website to function properly. These cookies ensure basic functionalities and security features of the website, anonymously.
Functional
Functional cookies help to perform certain functionalities like sharing the content of the website on social media platforms, collect feedbacks, and other third-party features.
Performance
Performance cookies are used to understand and analyze the key performance indexes of the website which helps in delivering a better user experience for the visitors.
Analytics
Analytical cookies are used to understand how visitors interact with the website. These cookies help provide information on metrics the number of visitors, bounce rate, traffic source, etc.
Advertisement
Advertisement cookies are used to provide visitors with relevant ads and marketing campaigns. These cookies track visitors across websites and collect information to provide customized ads.
Others
Other uncategorized cookies are those that are being analyzed and have not been classified into a category as yet.
SAVE & ACCEPT

See our Privacy Notice for details as to how we use your personal data and your rights.